How to: Grow lychee by seed

Sapindaceae is a large plant family that includes many common and economically important genera and species, including maple trees, rambutan, longan and lychee. Lychee fruit comes from the Litchi chinensis tree and is in the monotypic genus Litchi, meaning it is the only species in the genus. Despite this, it is very similar in appearance to its relatives, the rambutan and longan. The lychee comes from China where it is a well-liked fruit and for the most part commercial cultivation is limited to south east Asia. The lychee tree can grow quite tall, and yields large bunches of bright (reddish) colored fruits.

Lychee trees can be grown in tropical and sub-tropical climates, requiring warm and wet summers as well as mild winters. Although they can handle short periods of frost, they are rather sensitive. Despite this they have been cultivated in many parts of the world including in the lower states of the U.S.

Lychee fruit can be purchased easily during the correct season (May – July) and often at a reasonable price. The fruits have three main components, a thin tough rind, thick sugary flesh and a hard dark seed. The flesh is delicious fresh, it is juicy with a somewhat floral flavor, and is stored well in the freezer for later use.

Growing lychee from seed:
Lychee seeds are quite easy to germinate through a variety of methods. Choose seeds that are from freshly eaten fruit, as they will have a much higher germination rate. Be sure to clean off any excess fruit from the seeds.

Firstly, the seeds should be soaked in water for about three days, each day the water should be changed. You will notice that the dark shell of the seed will begin to split, this is when you may begin the next step of germination. I have tested germination directly in soil and using a wet paper towel in a plastic bag and they are both comparable. So follow the method that is easiest for you. The seeds should be planted in well draining potting soil, ideally one with vermiculite and perlite, but most commercial potting soils will do just fine. Plant at a depth of about 3/4 inches.

Lychee seedlings may be grown inside near a window that receives a lot of natural light, or alternatively they can be planted in pots and kept outside until winter. Of course, lychees will do much better in sub-tropical and tropical climates, they can also be brought to flower and fruit in greenhouses. 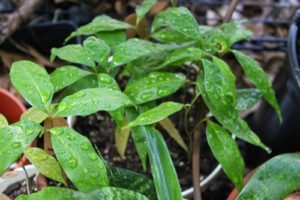 Avoid fertilizing lychee seedlings for the first year, and only light applications until growth becomes large and woody. 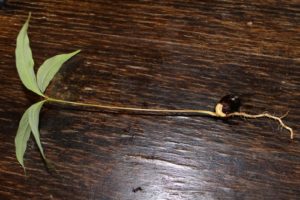 Upon germinating, the lychee seed will provide the necessary nutrients to support the growth of a main root and shoot. As the shoot emerges from the soil the cotyledons will begin to develop. Initially the leaves will be slightly discolored, often yellow or purplish, but as the leaves begin to generate chlorophyll the leaves will turn a dark green. At this point the seedling is capable of conducting photosynthesis and true leaf growth will begin.