How to: Grow Papaya from Seed 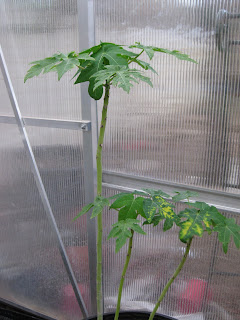 The Papaya is an iconic tropical fruit coming from the Carica papaya plant. Typically papaya trees can get quite large, sometimes over thirty feet tall. As far as tropical fruit trees go, I believe that the papaya is the easiest and most rewarding for beginners to grow. This is because they germinate fast and grow extremely tall in just a few years. They aren't true trees, however they are actually considered herbs. Papayas are particularly fast growing compared to most perennial fruit trees and can be harvested in as little as three years. 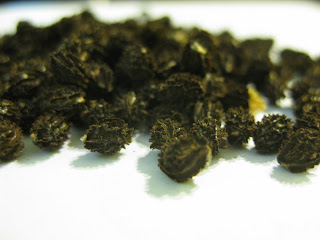 Papayas have a lot of seeds in them, so one papaya is enough to get a decent sized plantation going. Of course most growers don't want (or have the space) for that many papayas, luckily the seeds stay viable for at least a few years so you don't have to grow them all at once. When collecting seeds from a papaya fruit you will notice jelly-like capsules surrounding each seed. To greatly improve germination rates, storage time, and disease resistance, you should remove each seed from the surrounding gel (aril). For those living in the United States, two varieties of papaya are most commonly found in grocery stores, the Hawaiian and the Mexican papayas. The Hawaiian variety is a smaller than average fruit, while the Mexican papaya a true giant but doesn't taste as good. You can find a wide range of papaya cultivators on the internet, even dwarf varieties that fruit at low heights, perfect for greenhouses.

Admittedly, Papayas are rather difficult to grow in non-tropical climates, but it is possible. Even light freezes can completely kill a papaya tree so my guess is that most people below zone 7 or 8 probably don't have a chance at growing a papaya outside. I have heard of some people in town (zone 8) growing full sized Papayas in their backyards, but I have yet to see that for myself. Papayas also prefer to be grown in humid climates, but I have found that they will grow outside in Tucson with as little as 20% humidity. 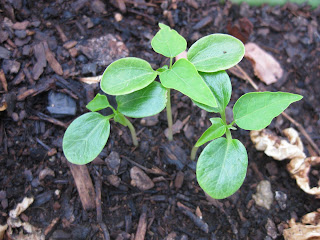 As with most fruit seeds, germination takes a while (up to a month or more). There are several ways to go about germinating the Papaya seeds, I recommend directly sowing them into soil. If you are worried about germination rates try putting your seeds in a warm cup of water for a day. Seeds that float to the surface will not sprout so scoop them up and throw them away. Picking a well-draining soil is crucial for growing papayas, go for a potting mix or make your own. Soils that don't drain well can cause root rot that will easily kill even a fully grown papaya.

Don't worry about fertilizing your papaya seedlings, they won't need it until they are at least 6 months - 1 year old. Fertilizing should be done often but not too often, also go for a high nitrogen fertilizer. Being such a fast growing plant, it requires a constant supply of nutrients, therefore I like to feed them about every month. If properly cared for your papaya should be towering over you in just a couple of years. Unfortunately, after harvesting your papaya it will die back. Much like a banana tree, the papaya tree can be regrown after harvest. This is done by cutting the trunk down significantly, as low as a few feet. After this is done offshoots will begin to grow off the sides of the trunk. Only the most vigorous offshoot should be left to grow, cut off the rest.

I know that Papayas have a hard time with a wide range of insects and pests, but I have yet to encounter any pests on my papayas. Perhaps this is because my papayas are grown in a greenhouse while most of the ruthless papaya pests live in the tropics. 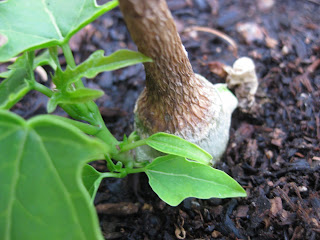 This is one of my papayas that suffered the freezing temperatures of the winter. While most of the plant had died, the plant still had enough energy to send off a new shoot. 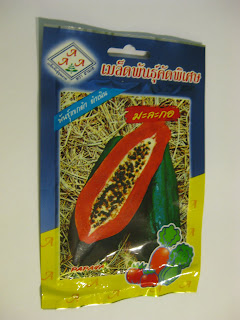 This is a package of Thai papaya seeds that is sold in Thailand. There papayas are treated as common fruits, where as in the United States and Europe they are considered exotic.
Posted by Edible Tropicals at 3:32 PM

Labels: How to:, Papaya