How to Grow: Taro

Taro is a common name for a wide range of plants under the family Araceae. There are many species of plants that are hosts to the name, and there are plenty of species within the family that are edible. The most commonly used species for consumption is the Colocasia esculenta. The leaves, stems and roots of taro are a staple crop in many regions worldwide, especially Asia.

Toxicity:
Taro leaves are indeed considered "Toxic" when uncooked. This is due to crystal compounds that occur naturally in the leaves and stems of taro. These crystals are shaped like small needles and are highly irritating. Consumption of raw taro is a mistake that one will make only once. I have made the mistake myself, upon eating about half of a taro leaf I experienced an itch in my mouth that lead to an extremely painful swelling in my esophagus. Cooking of the taro will reduce the crystal chemicals to a safe level and improve the taste and texture of the plant. Taro is popular in many dishes worldwide; It is commonly prepared in stews and stir-fries. Due to the crystal compounds, leaves (which have a high concentration of these) are considered a "last-resort" food in many regions and is only consumed if there is a food shortage.
Ornamental Uses:
Strictly ornamental varieties of Elephant Ear exist under the Caladium genus with brightly colored, usually pink, leaves. Many species from the Colocasia and Xanthosoma genera are also popular ornamental plants. Variations occur on many of these ornamental species, such as especially elongated leaves. Many include variegations exhibiting beautiful stripes and splashes of color.

Areas for cultivation:
Most Taro/Elephant Ear plants are considered tropical, thus they are sensitive to frost. The majority of these plants need to be grown in zones 10-11 with warm temperatures and a moist climate. There are some ornamental elephant ears that are exceptions and can easily grow in lower zones. Wherever taro is being cultivated, the soil must be light and moisture retentive. At the same time the soil should be well draining as to not waterlog the tubers. If you live in an area with unsuitable conditions for taro, you can always grow it indoors or in a greenhouse.

How to Grow Taro/Elephant Ear:
These plants are easily cultivated by tubers, thick potato-like roots. First you must obtain some of these tubers which can sometimes be found in grocery stores. Depending on the species of Taro these tubers will look very different. Some will be smooth and round, others will be rough with root-like fibers. Growing this plant is as simple as placing the tuber in fertile soil and adding water. You can even cut the tuber into sections to multiply your crop. Within the first week of planting the tubers you should notice a small green stem poking through the soil, this will be the first leaf. Over time the plant will develop into a thick bush and grow to a height of a foot to more than 6 feet (depending on the species). As the plant develops it will send off more shoots, leaves, and tubers allowing you to gradually harvest without harming the plant. Industrial fertilizers should not be necessary for growing Taro, instead apply rich manures or compost to the top soil. If all goes well Taro can be harvested in less than a year. 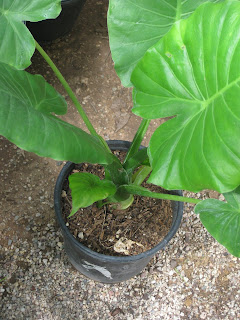 This is one of my elephant ears of an unknown species/genus. It is different from the rest of my taro plants in that it's leaves are shiny and feel like plastic. 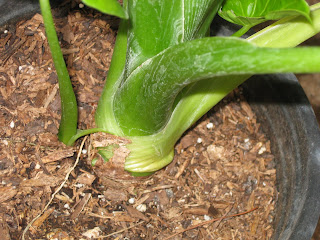 Here you can see the base of the same taro plant. Each stems comes from a single larger stem that keeps sending off shoots. A baby shoot can be seen in the left of the picture. These usually come up straight from the tuber below the soil. 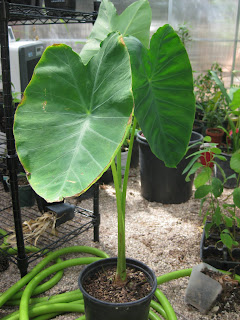 Here is another one of my taro plants of a different species. You can clearly see the difference in growth habits. This plant is also growing from a single base stem but is much taller. 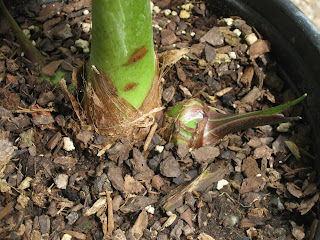 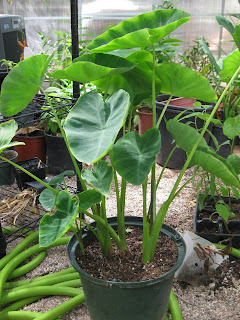 A more developed Taro plant exhibits what looks like many different plants in the same container. This is because as the plant grows, it sends off new tubers (just like a potato), each of the tubers then has the potential to send off more shoots. 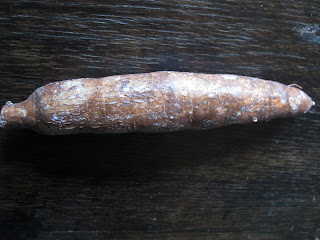 This is a cassava tuber that I purchased at a local special foods grocery store. It was mislabeled as "giant taro root" without a species or genus. This is sometimes the case when buying imported agricultural products, but it certainly makes for a good surprise!

Posted by Edible Tropicals at 11:43 AM

Labels: How to:, Taro