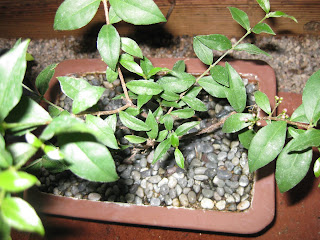 The Dwarf Barbados Cherry (Malphigia punicifolia) is a popular choice for use as a bonsai. This is mainly due to the plant's extremely small size. Aside from use as a Bonsai, the Barbados Cherry is great as an indoor/outdoor container plant. With the ability to withstand 25F temperatures, this plant is quite versatile and will do well in a greenhouse, indoors and outdoors (with mild winters). The light requirements of the Dwarf Cherry are moderate, allowing it to grow in partial shade or even indoors. It's demand for water is high and it shouldn't be allowed to dry out for extended periods of time. I recommend using a well draining soil and watering it often, especially when in bloom or fruiting. 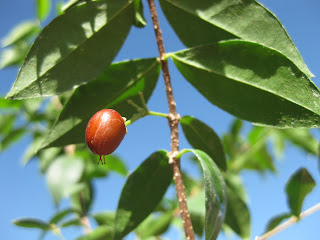 The fruit:
Cherries from the M. punicifolia are very small (just over 1cm long) and red when ripening. The taste is rumored to be sweet in some varieties, although I find the taste to be rather bland. If I could compare the taste to anything it would probably be a mild tomato. You will find a miniature seed inside of each cherry, but don't get too excited about sprouting it, germination is very difficult with this plant. There are blooming cycles that are activated by numerous factors such as day length, temperature, and water. I am unaware of any way to positively stimulate the plant to produce more cycles, but typically you can expect about 3-6 cycles a year in a mature plant. Disappointingly most flowers never turn into fruits, either due to difficulty in pollination or the plant's burden to produce a large quantity of fruit. You will notice that many of these plants have ten or more flower clusters on one branch so there is at least a lot of chances for fruits. When pollination occurs the flower will lose all of its petals and then either shrivel up or develop a green fruit that will eventually mature and ripen red. 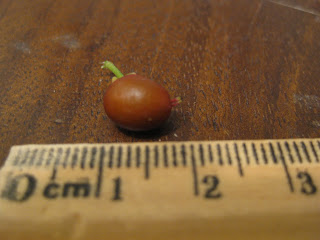 Propagation of the Dwarf Barbados Cherry:
There are many options available for the curious grower to get a start on growing their own M. punicifolia but the most common is propagation by cutting. Growing by seed may yield high genetic variability (if you can get the seeds to germinate), this may produce undesirable offspring. Propagation by cutting will as always, produce an exact clone of the parent. This can be done by selecting a branch that has some hardwood as well as a few leaves (the hardwood is a darker color and of older age than the softwood which is newer and usually greenish). Fungicide and root hormone should be applied to the end which was cut for the highest chance of success. There are a variety of methods which may be used to stimulate root growth of the cutting, these would be placing it in a plant propagator (typically an aeroponic system) or most simply by placing the cutting about an inch or two in a well draining soil. It may take 1-2 months before you can see roots grow but don't get too hopeful as most cuttings won't survive so do more than one.

As a Bonsai:
The Dwarf Barbados Cherry does excellent in almost any kind of bonsai container. I have mine planted in a shallow rectangular container made of clay, but I have seen them do well in narrow but deep containers as well. This plant is perfect for bonsai culture as it grows new leaves and shoots readily yet maintains solid mature looking stems. The most attractive aspect of this plant as a bonsai is its numerous and persistent flowers in addition to its fruit. 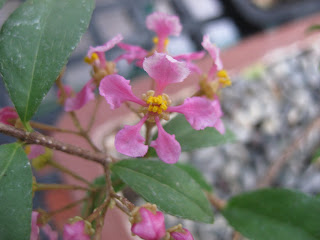 Common pests and diseases for the Dwarf Barbados Cherry:
Personally I have found aphids to be the most devastating, they primarily attack the young flower buds and leaves. I take care of them by spraying a safe insecticidal soap twice a week until they are gone. I have heard that nematodes and pathogens are other common problems.
Posted by Edible Tropicals at 4:12 PM