Knowing your growing zone helps you figure out what you can and can't grow in your climate. Traditional North American growing zones, or hardiness zones, are labeled 1-11 and include an (a) and (b) zone for each number. On the scale, 1 represents the coldest of zones while 11 represents the warmest. Each zone number corresponds to the average annual minimum temperatures of that zone, starting at zone 1 (-50F) and going up by 10F increments all the way to zone 11 (40F). The letters (a and b) represent 5F increments. For example zone 8a has a average annual minimum temperature of 10F-15F while zone 8b is 15F-20F. Typically for North America, the further north you go the lower the growing zone (colder) and the closer to the equator that you get, the higher the growing zone(warmer). There are a lot of factors that influence the minimum winter temperatures but most important are the distance to the equator, altitude, and distance from coastal regions. 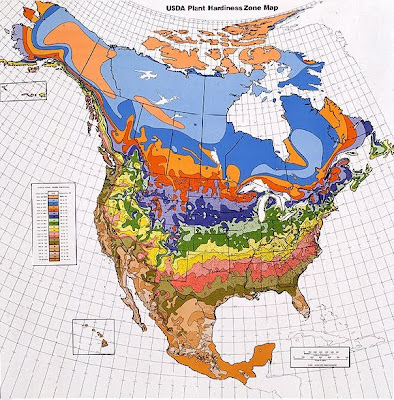 This is the National Arboretum's USDA plant hardiness map of North America. For those in the United States hardiness zones can be found at usna.usda.gov. Those living in other countries should check their government websites or their national botanical garden's website to find local hardiness zones. Many countries create their scale differently than the USDA scale. Some simply add more zones to the traditional USDA scale that go up to 13+ while others create a whole new scale. An example of this is Australia's hardiness zone map that can be found at anbg.gov.au.

A good understanding of growing zones is crucial for growing any plants outdoors, and especially tropical plants. If you want your plants to survive winter it is important to know their hardiness and your growing zone. Most commercially grown plants come with the hardiness printed on the label so you can know if the plant will survive winter or not before you buy it. Its possible to grow plants that wouldn't normally survive your zone by either covering them during winter months, or putting them in a greenhouse. If you know of any hard freezes it would be wise to cover any cold intolerant plants with some sheets during the night. This keeps the plant a little bit warmer. Citrus trees are popular here in Arizona and they grow quite well but in many places people must still cover them for freezes to keep them from dying.

Some perennials and trees need chilly winters to survive and continue to grow the next year. The chill period first occurs during Fall, in which the deciduous trees lose their leaves. During winter months with chilling temperatures (~40F and below) plants such as bulbs and some fruit trees will become dormant. These "Stone fruit" trees (Almonds, Peaches, Nectarines, Plums, Apricots, and Cherries), some "Pome fruit" trees (Apples and Pears), and many berries (Blueberries, Blackberries, Raspberries) need a specific amount of chill time, depending on the variety and cultivar. This will range anywhere from a few hundred hours to two thousand hours. Areas like Hawaii and Florida in addition to tropical locations worldwide aren't able to grow such trees because they can't provide adequate chill time (if any at all).

Minimum temperatures have little variance in most tropical climates. Instead of having warm and cold seasons they typically have a dry and wet season. The dry season is marked by time period of lower than average precipitation/humidity; The wet season is usually marked by monsoon rains and is often referred to as a rainy season. Due to annual weather cycles the wet and dry seasons are predictable, but occasionally tropical locations will also have a cool season. A cool season is simply a season with slightly lower temperatures.
Posted by Edible Tropicals at 5:42 PM