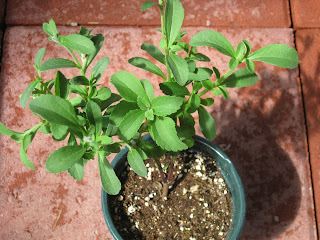 Stevia rebaudiana is a member of the Stevia genus consisting of American herbs and shrubs. This specific herb, commonly called Sweetleaf, is indigenous to Paraguay and has an amazing secret, it tastes extremely sweet. What could make this plant any more magical? Its sweet taste isn't created by conventional sugars, instead by a chemical named Stevioside found within the plant. The result is a sugar-free natural sweetener.

Stevia is a popular sweetener and is used in a variety of methods. Commercially the sweet compounds are extracted and sold in liquids or solids for use in food. Stevia leaves can be dried and brewed into a sweet tea or added to other teas to make them sweeter. People often sweeten their morning coffee with a powdered or liquid extract of Stevia. These extracts can be purchased at a local grocery store and are often preferred over the leaves because the extracts dissolve completely as opposed to the leaves which will be left floating around in your drink.

Growing Stevia from seed is very difficult, this is due to Stevia's low germination rate. Not only are the seeds hard to get growing, they are hard to find. If you are lucky enough to buy seeds make sure they are fresh and get at least a few hundred or more. This may seem like a lot but the seeds are very small and with such a low germination rate you will need quantity and a bit of luck. A much easier way to get a hold of some Stevia plants is at your local nursery. While most nurseries carry Stevia make sure you taste it before you buy it. Due to an endless combination of reasons (Soil, Ph, Temperatures, Genetics, ect.) Stevia can be very bitter so pick out the one that tastes the best to ensure you are getting a good quality plant.

Planting Stevia:
This plant does good in pots or planted in the ground, but keep mind of temperatures. If you plant Stevia in a pot you can leave it outside in a garden or backyard and bring it in during the winter. It is known to die back during the winter (if it is outside) but it is likely that it will resurrect during the spring so long as it didn't get too cold. I wouldn't subject this plant to anything under 32°F so it is probably best suited for outdoor cultivation at climate zones 9-11.

How to care for Stevia:
Be alert and check your Stevia frequently for flower buds. Make sure to pinch off all of these flower buds to increase the longevity of your plant as well as enhance the flavor of the leaves. When a Stevia plant goes to flower the leaves become more bitter and are far less enjoyable. Don't be afraid to take a daily snack on your plant either. By trimming up the plant it will be forced to focus on further leaf production as opposed to flowers, plus the new leaves taste the best. Be sure not to water too much, if you notice that the soil is soggy don't water it more. Water logging can easily kill a Stevia plant, especially when indoors where moisture is retained better. Also be sure your Stevia has sufficient light, part shade or full sun, if you plant inside make sure it is near a south facing window to get the maximum amount of light.

Government regulation of Stevia:
Due to Government concern about Stevia's safety it is regulated and even banned in some places, most notably the European Union. Most of the skepticism surrounding this plant is due to its relatively recent discovery and limited research on its safety for consumption. No real evidence suggesting harmful effects on humans has been documented and the sweet compounds in Stevia are "Generally recognized as safe" for consumption by the USDA.

Update: Stevia is no longer banned by the European Union.
Posted by Edible Tropicals at 7:01 PM